Bermagui was originally inhabited by the Dyirringany people and takes its name from the local aboriginal word 'permageua' which means 'canoe without paddles'. 'Murunna' is an aboriginal name meaning 'clear blue waters'. There is also a Murunna Point, a headland just north of the popular Camel Rock surf beach (6km north of Bermagui on Wallaga Lake Road). The headland has significance to the local indigenous people and has a vista that encompasses Wallaga Lake, Gulaga (Mt Dromedary), Najanuga ('Little Drom') and Barunguba (Montague Island). There is a walking track that starts on the edge of Wallaga Lake and traverses Murunna Headland south to Camel Rock. To get there, drive north out of Bermagui on Wallaga Lake Road to Wallaga Lake Heights, turn right and drive down to the playground at the end of Wallaga Street.

The small cottages were built as workmen's cottages in the 1920's. In the 1950's the cottages were owned by a Mrs Hemstock and converted to holiday cottages.

The owners of Murunna Cottages, Pauline and Terry McCabe have a long association with Bermagui that dates back to the 1920's. Terry's Grandparents, Kieran Patrick (known as Ken) and Eileen Clare O'Shea came to Bermagui in 1921 from Tamworth. Their initial plan was to buy the Tilba Hotel which was for sale at the time. They set out from Tamworth and travelled from Sydney to Bermagui by boat, which was the only available transport at the time. As Eileen O'Shea was pregnant with her first child (Terry's Mum) they stayed overnight at the Bermagui Hotel intending to travel to Tilba the following day. However, over a few drinks that evening, the owner of the Bermagui Hotel told Ken that his Hotel was also for sale. Ken and Eileen Clare decided to buy the Bermagui Hotel instead. 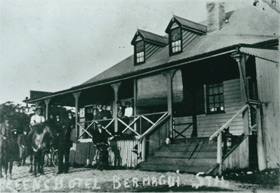 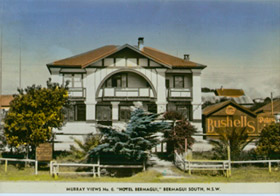 Ken was very active in the town, involved in building a race track in Bermagui and rebuilding the Hotel. Sadly, Ken died at the young age of 48 years. There is a memorial commemorating Ken’s life and contribution to Bermagui in the park across from the Hotel. His wife Eileen Clare was a very strong, capable woman and ran the hotel on her own for many years. The Hotel remained in the family until the late 1980’s.

Pauline and Terry have always loved Bermagui. They spent their honeymoon there and their children were introduced to Bermagui before they could walk. They initially rented the house at Murunna Cottages for a holiday over the Christmas period and found it to be an ideal house for a family holiday. The kids loved the big yard where they could play cricket, rugby and soccer with their cousins and the large kitchen was great for family gatherings.

Pauline and Terry bought the house and a few of the cottages a couple of years later when they came available. A few years after that they bought a cottage and a half (a boundary line divided a cottage in half!) as this just made good sense. The family have continued to have family holidays there. Pauline and Terry repaired and renovated the cottages in 2011 showing the utmost respect to their historical character while trying to keep their relaxed holiday feel.

Most of the floorboards in the house and in the bedrooms of the cottages are the original floorboards that were found unexpectedly and in fantastic condition under carpet and lino! They are made of local hardwood including spotted gum and iron bark.The house also has high wooden picture rails and large spacious rooms.Pauline and Terry continue to enjoy their holidays at Bermagui. They hope that those who stay at Murunna Cottages will also fall in love with the town and enjoy a relaxing and refreshing holiday. 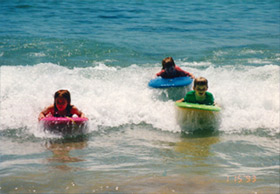 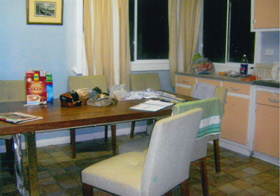 old-kitchen
The Spotted Gum kitchen before the renovation… 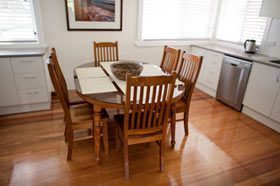 floorboards-kitchen
…and after (look what was under the lino!)